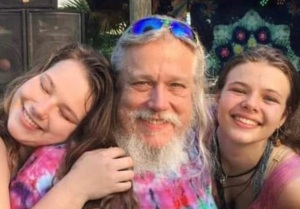 John Hartwell Robbins, 58, passed away on May 26, 2022 at The Pillars in Biloxi, MS. He was born on February 10, 1964 in Jackson, MS, the oldest of four boys to John and Edwina (McCarley) Robbins. He grew up in Brandon, and was as Hartwell by those who knew him best. He found a love of music early on and picked up the guitar, teaching himself to play. Hartwell enjoyed jam bands, folk and jazz music, and hung out with his "tribe" most every day. He attended Brandon schools, graduating with the Class of 1982 from Pillow Academy in Greenwood, MS., and went on to attend Hinds Community College for a while. After his educational pursuits were over, Hartwell worked as a bouncer for small clubs in Mobile, AL., where he met Michelle and together they welcomed his first daughter, Bailey, in 2000.  He had a very deep voice with a hearty laugh, which was definitely heard by everyone in the vicinity. His size and voice served him well as he worked to keep the peace in various places. He has lived in a few places along the way, with Austin, TX being significant, where he and Michelle welcomed his second daughter Zoe in 2003. Eventually the winding roads of life brought him back to Greenwood and also Columbia, MS. Over the years, Hartwell continued to play music and perform wherever he could, with Birdie's Roadhouse being one of his favorite venues. He loved to laugh and had a vibrant, but dark sense of humor that only those who knew him best, completely understood. He was a huge Jeopardy fan, loved to tie-dye shirts, and had to have his Coca-Cola. Hartwell's favorite thing to do in life though, was party, and boy could he do so. A fun-loving brother and father, he will definitely be missed beyond measure by all whose life he touched. He was preceded by his parents, John Robbins and Edwina McCain. Left to cherish his memories are: his two daughters, Bailey and Zoe Robbins (Jake Hampton), and one bonus daughter Alex Lollar all of Gulfport; his brothers, Guenther Robbins of Bay Minette, AL, with Palmer (Ada) and Montie Robbins, both of Brandon; two grandbabies Ruby and Fox Lollar, who gave him the name PawPaw. Hartwell leaves numerous extended family, and his tribe of friends, including his life-long best friend, Ted (Jessica) Adams of Brandon, MS. His final wishes were to be cremated, which his daughters are honoring. Per his specific instructions, he will be scattered in many places, including some murky waters here and there, because that's what he wanted. A memorial service with the tribe will be held June 11-13, 2022 in D'iberville, MS off of Hwy 15. It is requested, for further information and the exact location of the event, to RSVP to his daughter Bailey at 228-235-1322 or through her Facebook page as well as his daughter Zoe at 850-225-3447. Trinity Funeral Services is honored to serve the Robbins family during this difficult time and asks that you remember them in your prayers in the days to come.

To send flowers to the family or plant a tree in memory of John Hartwell Robbins, please visit our floral store.

A Memorial Tree was planted for John

We are deeply sorry for your loss - the staff at McHenry

Join in honoring their life - plant a memorial tree

You can still show your support by sending flowers directly to the family, or by planting a memorial tree in the memory of John Hartwell Robbins
Share a memory
© 2022 Trinity Funeral Services. All Rights Reserved. Funeral Home website by CFS & TA | Terms of Use | Privacy Policy | Accessibility